Suzanne and I had the privilege of attending CONjuration 2022 at the Augusta Airport Hilton, November 4-6. 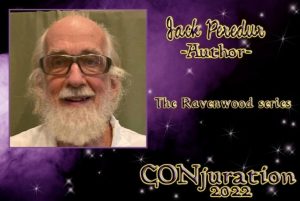 CONjuration (https://www.conjurationcon.com ) bills itself as a “Convention for Harry Potter Fans & other Magical Fantasy Fandoms.” It’s not just for the Hogwarts crowd, though, and year by year the focus is broadening to include The Game of Thrones, The Lord of the Rings, The Wheel of Time and many other franchises and fandoms.

Just as in 2021 we had an author’s table in the hotel lobby, this time back in the alcove with the Sorcerer’s Study, King’s Cross and Hall of Illusions, along with several other authors. Next to our table was M.C. Vaughn’s, co-anchored by his wife Donalyn and (getting ALL the love and attention!) their little white dog Jack.

M.C. Vaughn (not to be confused with M.C. Vaughan with an “a” – different author!) has written Phoebe, The Gray Angel, Monolith and Salem’s Ghosts, and is now working on a second book in the Monolith universe, to be titled Sanctum. We did a book swap and I’ve now finished Phoebe with great enjoyment and started reading its sequel, The Gray Angel. Time-travel stories with some fascinating differences from most!

Having taken part in some CONjuration panels in 2021, with the encouragement of Chris and Angela Seckinger who organize the con each year I expanded my sections into two full 45-minute presentations, a two-hour illustrated reading from The Moon Path, plus a hands-on workshop. 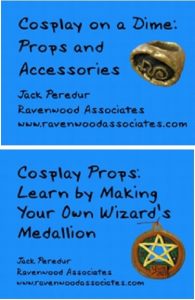 “Cosplay on a Dime: Props and Accessories” began as one segment in a 2021 panel by Renée Hess (also known as the Trolley Witch) devoted mostly to repurposing thrift-shop clothes as elegant costume components. My own segment came at the end as time ran short, so I could only touch on a few of the materials and methods I use.

For 2022 I expanded it to a full session following Renée’s, presenting “stuff” maché (it’s not just “papier” anymore!), polymer clay, “friendly plastic,” political yard signs (yes), silicone, plaster, epoxy, casting resin and many other materials, with completed samples of each to pass around.

You can look over the slide set, if you like, at  https://ravenwoodassociates.com/wp-content/uploads/sites/18/conjuration-cosplay-on-a-dime-10-28-2022.pptx

“Cosplay Props,” immediately following, was a hands-on workshop in which participants used cast resin and polymer clay to create medallions each customized with a sigil either created by the maker or chosen from among several dozen shown on the presentation slides.

I then baked the medallions overnight and had them available for pickup at my author’s table the following day.

The slides for that one are at  https://ravenwoodassociates.com/wp-content/uploads/sites/18/conjuration-make-medallion-11-1-2022.pptx

Both those sessions were on Friday, the first day of CONjuration.

Then on Saturday morning I gave a two-hour live reading from The Moon Path, illustrated with slides I’ve created using a 3D modeling program: 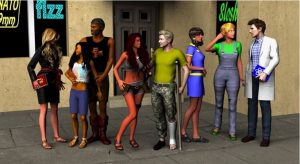 “In a small college town in the early Seventies three witches, a time traveler, a war-scarred G.I., a French dress designer, a telepath and a chemistry student all walk into a bar…”

My final talk was on Sunday afternoon. 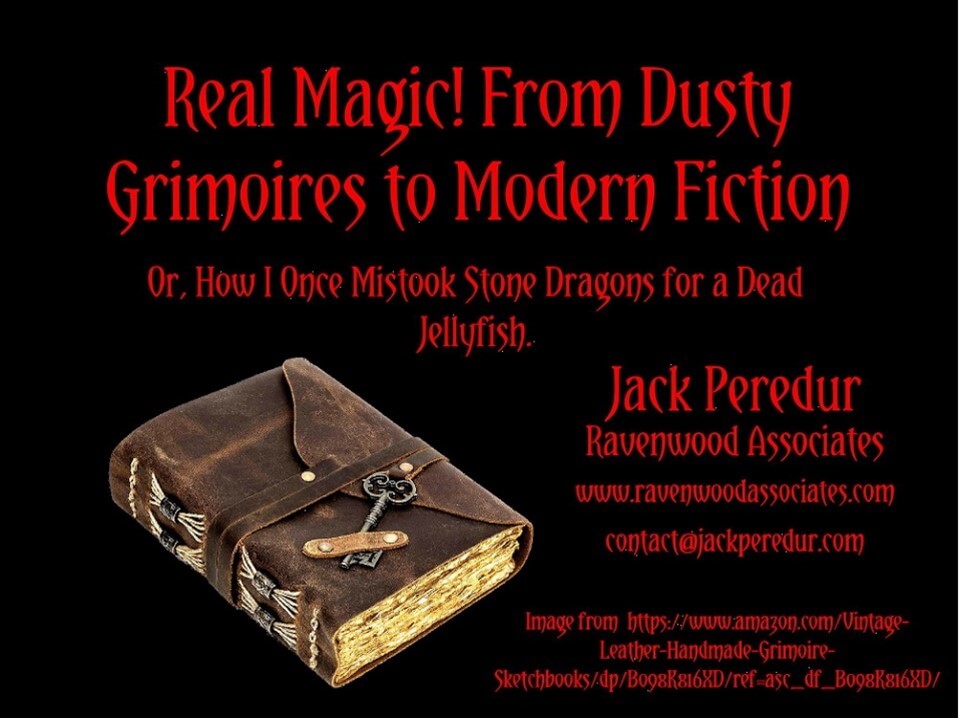 “Real Magic: From Dusty Grimoires to Modern Fiction” began by sorting modern authors’ fictional magical systems into “hard” and “soft” systems, distinguished by how thoroughly and consistently the systems were worked out and explained.

“Soft” magic is only a plot device and we don’t need to know how it works: “it was wizards” or “it was dragons” or whatever is all we’re given and all we need. We all can think of examples.

“Hard” magic, on the other hand, has well-defined rules and the reader needs to understand them to follow the story. A prime example is Lyndon Hardy’s Master of the Five Magics in which the protagonist and the reader together puzzle out the rules of not one, but five different magical systems operating in that world. 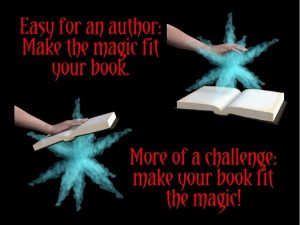 But that classification is flawed, since all those systems were just made up by the authors. To my way of thinking that’s an easy way out. More challenging is to take one or more existing magical systems – and yes, there are many in the old books modern fiction writers can use! – and shape the plot adhering to those ancient principles.

But what about those old systems? Do they WORK?

I took ten examples of existing magical systems authors have used in popular books, movies or TV series, and classified them according to how readily the magic in each could be tested today using the scientific method, adding anecdotes where possible (thus, the odd “stone dragons” subtitle!) from my own and other Associates’ experiences.

OK, one more set of slides. Sorry, this one is big so the download may be slow:  https://ravenwoodassociates.com/wp-content/uploads/sites/18/conjuration-hard-and-soft-magic-10-31-2022.pptx

I hope to present some or all of these same workshops again at CONjuration 2023, at other cons if I can arrange it, and as classes at the APA Natural Elements Shoppe,

Suite 101, 3351 Wrightsboro Road in Augusta, Georgia ( Natural-Elements-Shoppe.com ) and at EarthFest Augusta 2023. I’ll have more info in future newsletters as soon as I know the dates and times.

Meanwhile, the full slide sets for both of my “Cosplay” sessions and for “Real Magic” are posted in the Associates’ section under “Supplements to the Series.” Of course, they’ll make more sense if you attend a con where I present them in person and hear my explanation for each slide.

I’ve NOT posted the slides for my live Moon Path reading, since they contain a lot of spoilers for those who’ve not yet started reading the Memoir. Come to CONjuration 2023, though, or another con where I’ll have a reading scheduled, and see and hear it for yourself!

I’ll have more info on upcoming events in future issues of this newsletter.