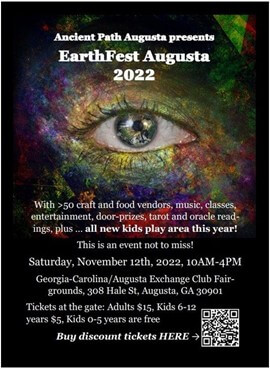 Ravenwood Associates was honored to be one of more than fifty vendors at EarthFest Augusta on November 12th, just a week after CONjuration 2022. Representing the Associates I had Books 1 through 12 of Ravenwood: A Seeker’s Memoir available for signing, along with the full set of Yamaya Treehawk’s Seasons of Ceremony. Sadly Yamaya herself was unable to attend in body, but at least was with us in spirit and represented physically by her books.

EarthFest continues to expand. For 2022, for the first time we filled the entire midway at the Augusta Exchange Club Fairgrounds. As the EarthFest flyer shows, in addition to the vendors we had food trucks, classes, live entertainment, psychic readings, and door prizes contributed by vendors. Ravenwood Associates’ door prize was a set of the first four books in the Memoir.

Despite some early clouds and wind, the weather was warm and dry and we had a good turnout.

Ancient Path Augusta (APA), a coven Suzanne and I have joined since moving to the Ravenstead across the river in Belvedere, sponsors EarthFest every year. APA is the area’s largest covenstead, and unlike some other covens you may have encountered or read about, it’s a large, diverse and eclectic group and a recognized church welcoming all people regardless of what path or tradition they may follow. There aren’t any scary oaths to take; all we require is mutual respect. We meet once a month for Full Moon esbats and also host public sabbats throughout the year.

APA also operates the Natural Elements Shoppe, hosts a chapter of the Spiral Scouts, and presents special events such as the annual Wytches’ Ball coming up on January 28, 2023.

For more information, see https://www.ancientpathaugusta.com/ or our Facebook page at https://www.facebook.com/groups/AncientPathAugusta/ . Note the latter is a private FB group, currently with almost 800 members.

And the beat goes on…

I’ll have more info on upcoming Ravenwood and APA events in future issues of this newsletter.