(And yes, that’s pronounced “mini-burp.” It’s a running joke among the Associates!)

It’s a dangerous world out there. And I don’t mean just because of plane crashes, highway traffic, random shooters, rampant hurricanes and the fast-melting polar ice. There are dangers in the magickal world, too…and not just for actively practicing witches, wizards, sorcerers, shamans and others of like persuasions.

You’ve surely felt that crawly back-of-the-neck feeling that someone, or some Thing, was watching you! Or had a day when everything unaccountably went wrong. Or seen something disturbing from the corner of your eye that was gone when you turned to look. Or been in a noisy restaurant when a sudden hush fell, the conversations dying as something frightening passed by unseen. Or just suddenly, for no reason you could name, felt a sudden surge of dread.

They’re out there. And some of them, alas, aren’t very nice. Worse, when you start to practice magick you tend to attract them like invisible mosquitoes.

There are countless ways of protection, of course. You might surround yourself with garlic, or wear a lot of silver jewelry, or load up with symbols of this religion or that. But the silver gets expensive, and the symbols clatter as you walk, and as for the garlic, well, let’s just say it plays heck with your social life!

This one won’t cost you a dime, doesn’t clatter, and has no smell at all. It needs no physical tools, and you can do it anywhere, anytime: skyclad or fully dressed, it makes no difference. And if people are around who’ll stare if you start tracing symbols in the air, you can even do it mentally – with a bit of practice! – without moving a muscle or making a sound.

In ceremonial magick there’s a powerful rite called the Lesser Banishing Ritual of the Pentagram. The Order of the Golden Dawn taught it to new members for safety before any other instruction began. Many variants exist. Because its name is long, though, most modern users just abbreviate it “LBRP”: pronounced “El-bee-ar-pee,” or more irreverently, “el-burp.”

Most versions are designed for a wizard or magician working in a prepared space with an altar of some sort, with a dagger or sword in hand and wearing a ceremonial robe. OK, that’s fine if you’ve got all that, but what if you’re caught in that crowded restaurant or out on some lonely blasted heath when Dreadfulness decides to drop by?

Thus, the “Mini-BRP” (“mini-burp”). No sword, robe or altar required. We recommend, though, that you practice! Practice!! Practice!!! until you feel you could do it in your sleep. Because someday you may have to….

But before that, get to know these “magic words.” No, it’s not gobbledygook from some lost or made-up language, nor bad Latin as featured in so many popular books lately. Perfectly good English, calling on the classical Four Elements and then on Spirit, the Fifth Element which unites and harmonizes them all:

AIR, ATTEND! “Attend” here has three distinct meanings, all valid. As in attending class: “Be present here with me.” As in paying attention: “Listen, and hear my words.” As in attendants: “Help me.” As the first words spoken in the mini-BRP, this gets the Universe’s attention.

FIRE, ASCEND! Just a single meaning here. Flames rising, as from altars of old, establish a connection between the mortal realm and that of the Gods.

WATER, MEND! Water fixes what’s wrong. Flowing over parched soil it brings life, while in our veins, as blood’s main component, it maintains it. Sanctified and dipped up from a chalice or font, dabbed by fingers or sprinkled from an asperger, or simply warm in a bathtub or sink, it purifies and casts out uncleanness.

EARTH, DEFEND! By its stability and immovability, Earth in the form of soil and stones endures and protects whatever is behind or beneath it. The world’s oldest paintings, for instance, still exist on cave walls because the Earth above has protected them through many thousands of years.

SPIRIT, BLEND! Present in all places and passing unhindered through all things, Spirit can carry and unite their properties making the whole far greater than the sum of its parts.

PEACE, DESCEND! This completes the spell, pulling down a shell of protection to surround and protect you.

Performing the mini-BRP, you are in effect casting a personal Circle calling on the Four Elements and on Spirit (or God, or the Gods, or Whatever you conceive as a higher power that will help you) to surround you with an invisible shield to ward off all harm.

Begin by facing East, if you know which way that is. If not, assume it’s the way you happen to be facing when you feel the need to “BRP” or, if you can pin it down, the direction where you feel the danger lies. 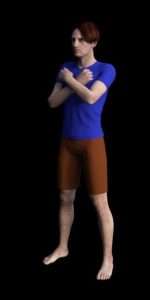 Stand straight with your feet braced well apart. Make fists of both hands and cross your forearms on your chest as in the first image. This is the Sign of the Skull, used in many Pagan traditions to signify the Horned God, and by making it you are telling the Universe you are entering “magickal mode.”

Shift smoothly into Projection position, as in the second image: your dominant arm stretched out straight toward the East, index and middle fingers extended, while you sight down it with one eye as if down a rifle barrel. Or if you have an athamé and prefer to use it, let its blade do the pointing. You may close the other eye if you like.

Bring the foot on your dominant side forward, your knee bent, dividing your weight between the ball of that foot and your other foot still flat behind. Rest your non-dominant hand on your hip. 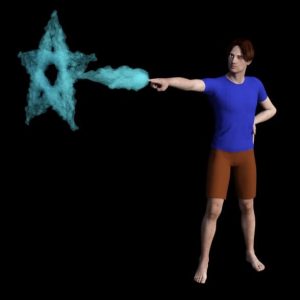 Take in a deep breath, and as you let it out visualize cool blue-white fire jetting from your outstretched fingertips or athamé blade into the space in front of you. At the boundary of where you want your shield it strikes an invisible plane and splashes out like spreading ripples, forming a pentagram hanging there made from that same cool fire.

If it feels right to you, trace that pentagram with your fingertips or blade: starting at the top and moving first down to the right, then around clockwise from point to point, returning at last to the top again. Or, you may find it enough to guide the fire mentally into that shape.

Know that by doing this, you are invoking the Element of Air calling it to your defense. Taking another breath, call out “AIR, ATTEND!”

Make a quarter-turn to your right, and repeat. Let the fire this time be coppery gold, the color of a bonfire’s leaping flames. Feel its heat! Again form a pentagram of it, the same size and at the same distance as before: knowing by doing this you are calling the Element of Fire to your defense. (The second image shows this point in the ritual.) “FIRE, ASCEND!”

Make another quarter-turn to your right, and repeat. Let the fire be green this time, the color of clear cool ocean water. Form the pentagram calling the Element of Water to your defense. “WATER, MEND!” 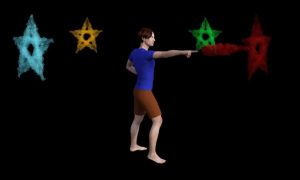 Make another quarter-turn to your right, and repeat. Let this fire be dimmer, red like a ruby or garnet or the glow of cooling lava. Form the pentagram calling the Element of Earth to your defense. “EARTH, DEFEND!”

Make a final quarter-turn so you face the same direction (real or “assumed” east) as at the start, then raise both arms open-handed as if tossing a very large beach ball and raise your head as if watching it rise. In doing so you form the Crescent Sign, climaxing the rite with a sign of the Goddess just as you began it with a sign of the God.

Picture that beach ball as pure white light coming from both your palms, rising to form a six-pointed star. Depending on your preference this may be either a Star of David (two interlaced triangles) or the “unicursal hexagram” much loved by the Golden Dawn and in Alaine’s tradition a sign of the God and Goddess united, with horizontal bars tilted to cross as shown in the third image. Again, you may trace it with one or both hands if you wish. By this you call 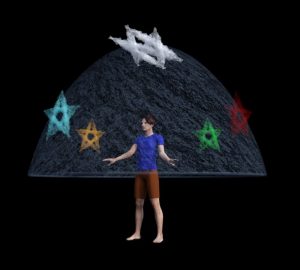 Them Both, or the Element of Spirit by whatever other Name you may give It, to unite and make perfect the protection already given by the Four Elements. See its rays shedding downward, and the pentagrams brightening in response. “SPIRIT, BLEND!”

Then sweep your arms outward and down, picturing a shell of protection starting in the Spirit light and rolling downward, a little like an old-fashioned window blind. I like to imagine this like the flickering gray “static” on an old-style TV set turned to a blank channel, but bent into a complete shell anchored by the Elements including Spirit. Bring the shell down to meet the ground, completely surrounding you. “PEACE, DESCEND!” 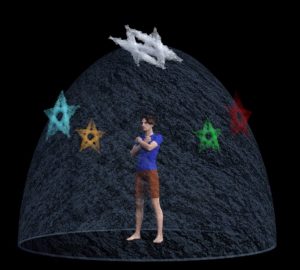 Last, bring your arms back up to cross them again in the Sign of the Skull, ending as you began. “SO MOTE IT BE!”

This completes the mini-BRP. Now you can go about your business knowing you carry potent protection all around you.

With a little practice, you can do the mini-BRP in thirty seconds or less. And unlike a working Circle, there’s no need ever to open or dismiss its protection. Let it linger, then renew it whenever you feel the need.

“But, wait! People are watching!”

Okay. Are they people likely to freak out if they see you drawing signs in the air? No problem. You can do the mini-BRP entirely in your imagination while sitting still and quiet. In fact, I’d make an educated guess you JUST DID, while you were reading the paragraphs above!

So practice it both ways: out in the “real world” with signs and turns and gestures and spoken words, and also just in your imagination. It works either way.

Wayfinder is a founding member of Ravenwood Associates
Close