As a first offering, since back in 1971 it was the key unlocking Alaine’s psychic flash (as described in The Moon Path, Book 1 of the Memoir) which really started us all on this journey, we will examine…

The Moon in most decks, including the one reproduced on the Ravenwood tapestries, is numbered #18 (or XVIII) among the Major Arcana. 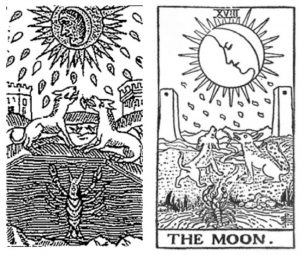 In its oldest forms, as in the Marseilles Tarot (dated to about 1390 AD) reproduced here, the card’s image seems divided into three roughly equal parts. At the bottom lies water, perhaps an artificial pool, in which lurks some creature like a lobster or large crayfish. At center are paired animals, likely a dog and a wolf, with heads upraised and mouths open as if howling, flanked by a pair of squat crenelated buildings or castles. And at top is the disk of the Moon itself: holding a frowning face in profile, bristling with spiky rays, and surrounded by shapes suggesting upside-down raindrops.

In redrawing the card early in the Nineteenth Century for the Order of the Golden Dawn, a group of English wizards, Pamela Colman (“Pixie”) Smith kept all these elements but opened up the perspective, fleshed out the scene with more details including mountains in the background, and added a winding path leading away into the heights seemingly guarded by castles now grown into lofty watchtowers. This is probably the version of The Moon most familiar today.

The unknown creators of the Yellow Corridor tapestries reproduced many of Pixie’s designs while also making a number of changes. In their “Moon,” shown here in full color, the water is reduced to a small pool at the very bottom while the winding path – the Moon Path, as Ravenwood Associates call it – leading up from it into the heights takes center stage. The dog and wolf howl up at a Moon whose frowning profile has become a grinning skull seen face-on. The small “raindrop” shapes of the Marseilles and Golden Dawn cards are gone, displaced by spiky rays now extending to the edges of the sky, while the towers appear to be hybrids of those in both earlier decks. 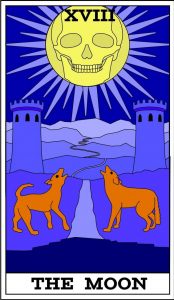 According to Eden Gray’s The Tarot Revealed (copyright 1970, Signet Mystic Books) the Moon card when upright represents a spiritual journey through imagination, intuition and dreams, though it warns unforeseen peril, misfortune and secret foes may lurk along the way. If reversed the card suggests imagination will be harnessed by worldly concerns and spiritual progress may be stymied until these are resolved.

“Book” meanings of the Tarot, however, are seldom the full and final answer; intuition must always be a guide. Occasionally, if the Gods so will it, the clouds will part as they did for Alaine and a deeper, fuller meaning will shine through. As she told Suzanne and me in that first fateful reading,

“It was as if a mist came over the card, and then spread over everything else. And then it cleared, and I was standing on a hillside, at night. I could feel the chill of the night air. There was a long road winding away, just as on the card…and beyond it the towers, and the Moon.

“I didn’t see the dog and the wolf, or the water at the bottom. Just the road, gleaming like gold from the Moon’s reflection, and Jack walking away, further and further… 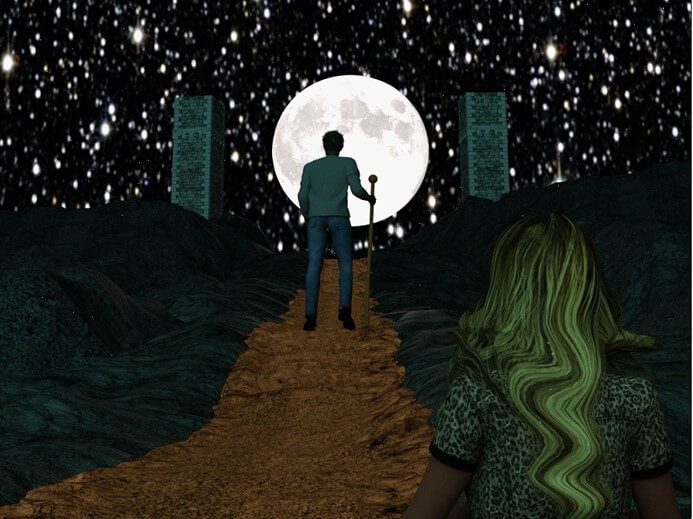 “Jack, this will be a year of growth for you: learning new ideas, and stretching your mind to the utmost. And it won’t always be in familiar, or even comfortable ways. You’ve learned a lot in the material world. Now you need to extend that into realms of imagination and intuition.

“It won’t be an easy journey, nor always a safe one. The path is steep sometimes, and dangers lurk in the shadows. But the light of the Moon is there to guide you…and others have passed that way before. Heed well the signs they’ve left!”

In this context, and more and more as Ravenwood Associates have come to understand it, the Moon card represents the lifelong journey of self-discovery we all undertake. We pass from the waters of the womb up through successive perils both natural (do the animals bite?) and man-made (who waits watching in the towers?). The way leads higher into stage after stage of developing skill and knowledge – though always through shadows and uncertainty! – until we reach a life’s crowning achievements…then pass on to Death, to be born once again and repeat the journey anew.